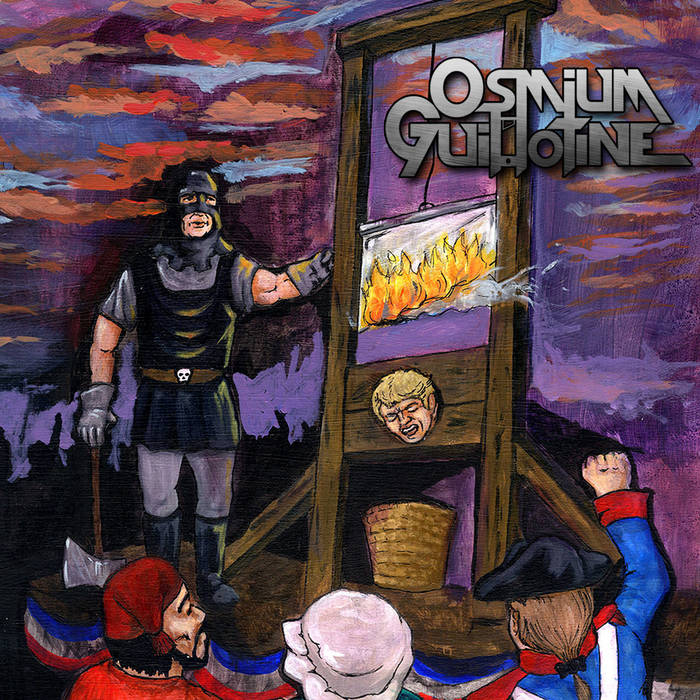 Bloodbath Fanzine Superb Essex based Trad metal torchbearers, good solid album of songs, standout for me was D-Day for the excellent “Maiden-esque” opening riff and questionable lyrical content. The rest of the album draws inspiration from doom and a bit of early thrash/speed with mixed success, but there's enough of the good stuff on here to make this a fun enjoyable record. Favorite track: D-Day.

The debut album by Osmium Guillotine!


Recorded & Produced by Danny B at HVR Studios, Ipswich.
Released by MGR Records.

All lyrics by James Balcombe, except:
Track 2 by Peter Keliris
Tracks 3, 4 & 10 by Elijah Kindon

All music by Osmium Guillotine, except:
Track 1 by Chris Saunders.

Reviews:
"A fantastic debut album from Osmium Guillotine, with the blend of attitude, style and musicianship only true British metal can deliver. There’s a new wave of metal on the way and this is exactly the kind of stuff that ought to be at the forefront of it, dark and heavy without being “brutal”, with great musicianship and songwriting."
- Chainmail Metal Reviews
chainmailmetalreviews.wordpress.com/2014/05/30/osmium-guillotine

"Every one of the musicians on this album plays their part perfectly, whether it be the ruling percussive elements of 80's metal, the ridiculously talented lead and harmonised guitarists or the vocal with attitude and pure feeling. For a debut album to sound this good takes hard work and a lot of love." 10/10
- Black Phoenix Rising
blackphoenixrising.freeforums.org/osmium-guillotine-osmium-guillotine-album-2014-t1767.html

“Constantly changing OG do not let the grass grow under their feet. It is very apparent from listening to their debut that they have poured every last drop of blood, sweat and tongue in cheek into it, but not too much of the latter, just enough for a small respite until the onslaught hits!” 9/10
- Pagan Hel Reviews
paganhelreviews.blogspot.co.uk/2014/07/osmium-guillotine-debut-11-track-album.html

"This is an album you can repeatedly listen to in full. A debut of real promise, this is a bright shining gem that promises a terrific future for a young act of tremendous virtuosity."
- Get Your Rock Out
getyourrockout.co.uk/wp/osmium-guillotine-osmium-guillotine/

"Turn that volume button up to the max, take the musical beating that comes your way and admire some artistes at home in their chosen noise and who are really producing the goods."
- Fungalpunk CD Reviews
www.fungalpunknature.co.uk/FUNGALPUNK/CDReviews/Page%201.html

"Osmium Guillotine have delivered an album that bears the mark of UK Metal's history of quality, and the band should wear this mark with their heads held high. With the right amount of touring and exposure, and the right utilisation of the passion and spirit on show here, this band have the potential to become UK Metal's bright new hope. This band deserves our support, plain and simple." 8.5/10
- Turn It Up! Media
turnitupmedia.blogspot.co.uk/2014/08/album-review-osmium-guillotine-osmium.html

"The band itself has great attitude, feel, songwriting skills and an understanding of combining elements of punk, thrash and early metal into one sound. It sounds familiar but also new, not easy to do. Guitarists Peter Keliris and Lance Steele have some catchy double leads and really fire up the fret board when the time calls for it….excellent, excellent work. And as the band morphs into the more brutal, trashy rhythms, bassist Daniel Thurgood and drummer, James Balcombe combine to roll out a heavy metal Sherman tank wall of sound."
- Metal Shock Finland
metalshockfinland.com/2014/07/26/review-osmium-guillotine-osmium-guillotine-2014/


"Osmium Guillotine creates a very interesting and old school approach to heavy metal with their musical sound which shows them combining the mid 70's and 80's sound together while also adding in folk, punk and classic rock to make their musical more original, the production sounds very old school yet professional at the same time while the lyrics cover war and fantasy themes." 8.5/10
- Extreme Underground Music Zine
undergroundmusickzine.blogspot.ca/2014/08/osmium-guillotineself-titledmgr.html

"This is Old-School Heavy Metal that manages to encapsulate quite a few different feelings from early Metal and distil them into this release. Classic Metal is a given, but Doom Metal, Proto-Thrash and NWOBHM all get a look in. There’s even a touch of Punk to things now and again."
- Wonderbox Metal
wonderboxmetal.wordpress.com/2014/08/29/osmium-guillotine-osmium-guillotine-review/

"Fuckin A is this some pure kick ass straight forward heavy metal with tons of catchy hooks and songs that are a metal fan’s dream. No nu metal or groove or any deathcore shit on this. Just a pure heavy metal release that Judas Priest would be a fan of. :"
- MetalCore Fanzine
www.metalcorefanzine.com/reviews73.html

"Osmium Guillotine have their feet partially entrenched in the New Wave of British Metal however there are also elements of the original wave of thrash metal so the band's music voyages through metal's past despite being in the present." 4/5
- The Small Takeover
smalltakeover.blogspot.ca/2014/10/osmium-guillotine-osmium-guillotine.html

"This band is a very broad mix of pretty much every balls to the wall genre out there; Heavy Metal, Punk, Hard Rock, Doom Metal… If you can bang your head and drink beer to it, these guys have it, and pull it off with ease!"
- Metal Temple
www.metal-temple.com/site/catalogues/entry/reviews/cd_3/o_2/osmium-guillotine.htm

"This album just works. It is sufficiently old school with the combination of classic metal and punk, whilst not a new sound genre wise, it is still unlike anything I have heard before."
www.mindnoisenetwork.com#!osmium-guillotine/c23lr
- Mind Noise Network

"Rip-roaring old-school metal, or is it shit-kicking street-punk? Either way, it’s one of the most exciting noises making ears bleed in Essex."
oliverarditi.com/2014/11/27/various-artists-album-roundup-032/
- Oliver Arditi

"Osmium Guillotine is the soundtrack to an ale-quaffing apocalypse of immoral and chaotic proportions. And I want to hear more."
www.cpburrage.com/osmium-guillotine---profile.html
- C.P. Burrage